What is the Democracy, Its definition, types and features

What is Constitution of India 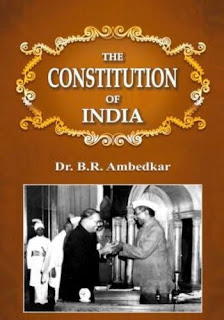 Constituent Assembly and making of constitution

The construction process of the Indian constitution took a total of 2 years 11 months and 18 days and about 6.4 crores was spent on this work.

Preamble of the Indian constitution

WE, THE PEOPLE OF INDIA, having solemnly resolved to constitute India into a SOVEREIGN SOCIALIST SECULAR DEMOCRATIC REPUBLIC and to secure to all its citizens:

EQUALITY of status and of opportunity,
and to promote among them all,

FRATERNITY assuring the dignity of the individual and the unity and integrity of the Nation;

IN OUR CONSTITUENT ASSEMBLY this 26th day of November 1949, do HEREBY ADOPT, ENACT AND GIVE TO OURSELVES THIS CONSTITUTION.

4. ‘Sovereign’ implies that people have the highest right to take decisions in every matter related to them. No external power can give orders to the Government of India.
5. ‘Socialist’ means that wealth arises in the society collectively and it should be divided in the society with equality. how should the government make laws related to the entitlement of land and industry businesses, that reduces social,economic inequalities.
6.  ‘Secular’ means that citizens have complete freedom to believe in any religion but no religion is official. The government gives equal respect to all religious beliefs and stages.
7. ‘Democratic’ means a form of government in which People enjoy equal political rights, people elect their rule and make them answer, this government conforms to some basic rules.
8. ‘Republic’ means that the head of the government will be a person chosen by the people and not a dynasty of the royal family.
9. ‘Justice’ means that citizens cannot be discriminated against on the basis of their caste, religion and gender.
10. ‘Freedom’ means there is no unreasonable restriction on how citizens should think and express their thoughts and how to mind their thoughts.
11. ‘Equality’ means that all people are equal before the law. Pre-existing social inequalities will have to be eradicated. Government will make arrangements to provide small opportunities to every citizen.
12. ‘Fraternity’ means that we all behave as if we are members of one family. No citizen should consider another citizen less than himself.